Playing with the grand daughter.

Freedom from large stereos was made available to the general public 30 years ago last week. Weighing in at just short of one pound, it was bohemium in size compared to the tiny iPods of today. Cassettes seem a thing of the past, but amazingly, the Walkman player

is still being produced today, but has not been updated since 2002.


While in Victoria over the July 1st holiday, we stopped in at Starbucks for a refreshment and I found thier newest gift card. It is designed to go on your key chain (I think that dangling with keys and change in a pocket will destroy the magnetic strip).

The new size is sure to please some, and aggrivate others.

If you collect Starbucks cards or would like to, drop me a line and I will show you how to get started. They are so neat and easy to display, colorfull, and the quality of art on the cards is impressive. Some are hard to find, but you can put together a nice collection fairly easily. This is also a great alternative hobby to coin or stamp collection, and is great for kids as well! Ask your family for thier old ones!

My laptop is causing me grief!

I cannot acres the Internet, it runs slow, keys are missing, etc. :-(

How I wish for a Mac Laptop and desktop! Sigh!!
-- Post From My iPhone

A plug for Tim Horton's

If you are looking for a nice refreshing drink, try the Green Iced Tea Citrus the sell in bottles.

While in Victoria over the July 1st holiday, we stopped in at Starbucks for a refreshment and I found thier newest gift card. It is designed to go on your key chain (I think that dangling with keys and change in a pocket will destroy the magnetic strip).

The new size is sure to please some, and aggrivate others.

If you collect Starbucks cards or would like to, drop me a line and I will show you how to get started. They are so neat and easy to display, colorfull, and the quality of art on the cards is impressive. Some are hard to find, but you can put together a nice collection fairly easily. This is also a great alternative hobby to coin or stamp collection, and is great for kids as well! Ask your family for thier old ones!

A few days in BC


Hi everyone. We are enjoying our time here with friends and family. Enjoyed the Klar / Wiltzen wedding, and are busy doing not much! :)


Hi there,
With BlogPress, one is able to post to their own blog from an iPhone.

I enjoy stopping in at Starbucks on our travels. Good coffee, usually they have good cakes, and unlike Tim Horton's, it is made to taste the same all the time!

p.s. where are we moving to you ask? A NEW LOCATION is in the works! And since my blog is not checked often by others including you, I can freely say that for now it is NOT BC! :).

Who will be the first to find out?1 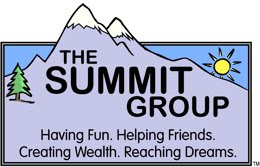 An update for all our friends.

Sorry for the lengthy break between posts!

CANADA DAY in Victoria, BC

We decided to take a three day vacation to Vancouver Island and be in Victoria for Canada Day and enjoy the fireworks there (photos to come later). To our surprise the roads and the ferry were not busy and I believe it was due to many people having to work on Monday. 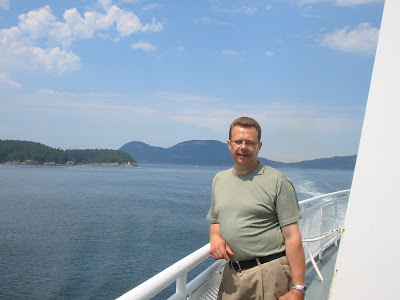 The ferry we chose to take was the "Spirit of Vancouver Island" which is one of the two larger and newer vessels running between the Tsawwassen terminal and the Swartz Bay terminal which is near Sidney on the island. 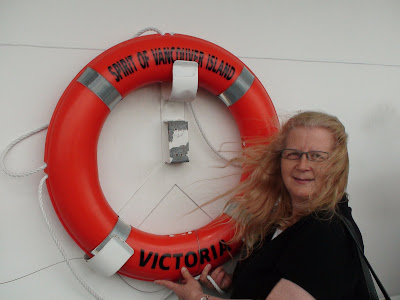 We stayed at the Coast Victoria Habourside Hotel & Marina which overlooks the inner harbour. I enjoyed watching the boats, ships, and float planes coming and going on the water below us.

Tuesday which was July 1st, was our busiest day in which we walked up and down the streets of downtown and looked in so many shops selling everything from beautiful and expensive art pieces, to souvenirs.

Here are a few pics around town. 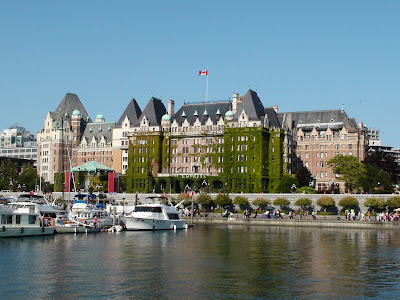 As we wandered through the streets we found vendors selling all kinds of things,actors were doing stunts, fast food stands were selling tasty snacks, and of course lots of people looking for something to spend their hard earned cash on. 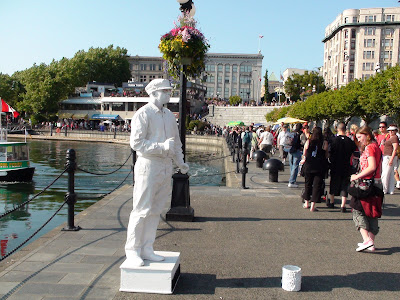 This is the "Plaster Man"...he only moves to show appreciation when you put $$$ into his pail! 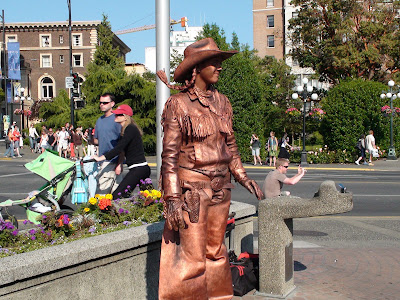 Here we see the 'Copper Cowgirl' as I call her. She also moves and thanks you for a cash donation or for photos with her. She is very good!

As far as attractions go, we took in one show at the IMAX theatre and went through the Wax Museum. We also tried a number of restaurants including the Noodle Box, Spinnakers, and Murchie's Tea & Coffee Ltd, to name a few.

It is amazing how you can wear yourself out in an 8 x 8 block area! 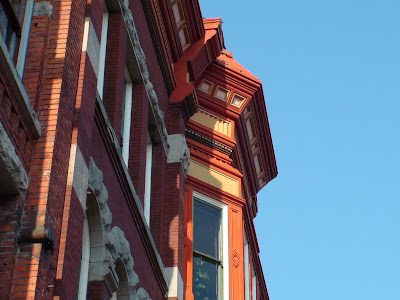 The older architecture is perfect for the photographer. 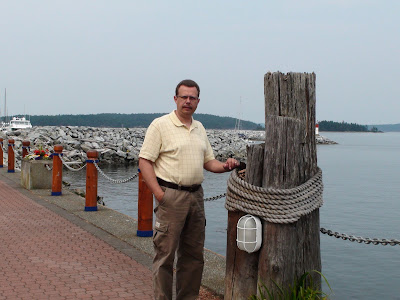 On our way back we stopped in Sidney for some simply great Halibut fish and chips at Rumrunner’s. 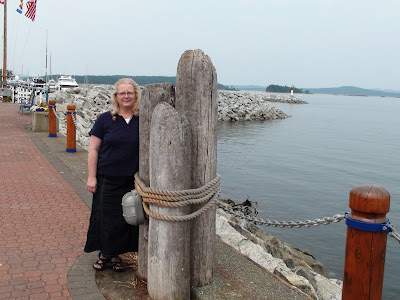 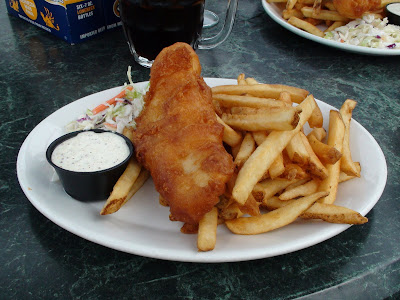 Besides having great food, it also offers a breathtaking view of Haro Strait while relaxing on the patio. We highly recommend you try it!

Got back home late night and must say…we had a great time!

More family came to visit us. 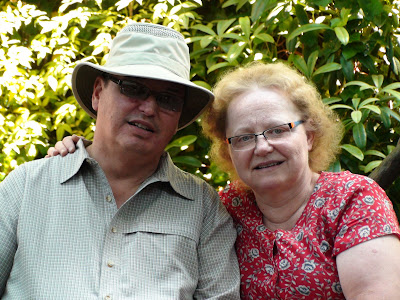 On Saturday Ruth's sister Elsie (and hubby) Michael (Bob) McDermott of Edmonton flew in to spend a week with us. They are enjoying the warm weather we are finally having here in BC.

Parking is nearly impossible as we spent the first 15 minutes just looking for a place to park. Not even the Paid Parking had room!! A good place to avoid in the summer!

Here are a few pics at Granville Island...minus the photographer of course! :( 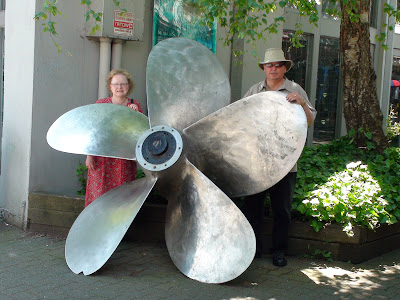 Bob & Elsie with one of the large ship propellers. 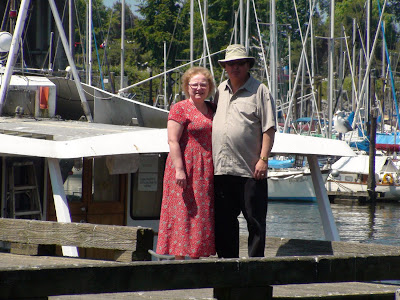 Standing in front of someone else's boat. 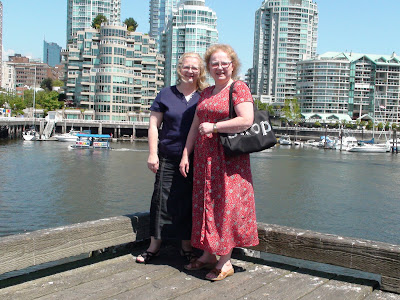 Please stay tuned for more of our adventures this week.
Posted by Ed H. at 9:28 PM 4 comments:

Did you get your "Eisenhower's Warning" email?

Today I received a few of those emails that get a person SO MAD...like how could the law makers do such a thing?

The titles: "Eisenhower's Warning", and the general context of the emails I received were the same, but the photos, the wording and even the color of the fonts used were so different that I started to wonder if this was really true? I needed to find out for myself.

If it is true, we the common people need to make a lot of noise about it, and if not, let's all take a deep breath together."

The verdict??? Ummm... nothing to get upset about. Also, most of the articles I found were dated back in the spring of 2007, so this story is already a year old!

So, if you get an email with the subject Eisenhower's Warning, and want to read something not bouncing around the email rumor mill, read this article:
SNOPES.COM


I disagree with not teaching this just because it may offend someone or some group...so what! There are a lot of historical as well as current issues that offend some...again, so what! Teach it anyway as it is a part of history!

The issue here is that the UK Government did not remove the teaching of the Holocaust from it curriculum as the emails suggest, but there were incidents of schools and teachers refusing to teach it in some grades.

Here are three clips from related articles that I read.

- 'It found some teachers are reluctant to cover the atrocity for fear of upsetting students whose beliefs include Holocaust denial...' (that would be the Muslims - ed.)

- 'The researchers gave the example of a secondary school in an unnamed northern city, which dropped the Holocaust as a subject for GCSE coursework. The report said teachers feared confronting 'anti-Semitic sentiment and Holocaust denial among some Muslim pupils'.'

- 'A lack of factual knowledge among some teachers, particularly in primary schools, is also leading to “shallow” lessons on emotive and difficult subjects, according to the study by the Historical Association.' (you may have the teachers giving the students misinformation rather than providing the facts - ed.)

Did the Holocaust happen? Of course it did! Should we continue to remind ourselves of it and teach it to our children? Certainly, but remember, our children should also know about the Crusades fought between 1095 and 1272 or so, and also about the more than 50 million Christian martyrs in the dark ages who died for their non-Catholic Christian faith or convictions.

This is my very first blog and so it comes with a lot of eagerness, enthusiasm and yet some trepidation!

This blog will mostly be on a personal bases geared to keep friends and relatives updated on our lives and our travels, but will also contain other items of interest. 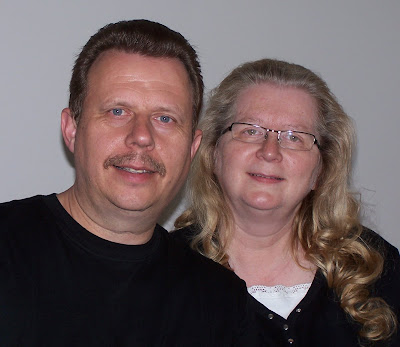 And so without any adieu...I begin.

On Saturday, May 24/2008 we were blessed with the arrival of our fifth grandchild Charlotte Anne to our son and his wife. She is a most beautiful little girl, and she has won the hearts of all who see her. Congratulations and best wishes to and Natasha! 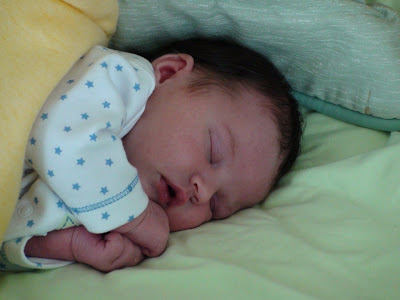 Ruth’s Mom and Step Dad just left this morning. They came from to visit us a week ago Saturday May 24/08. We had a great time and I believe they did as well. 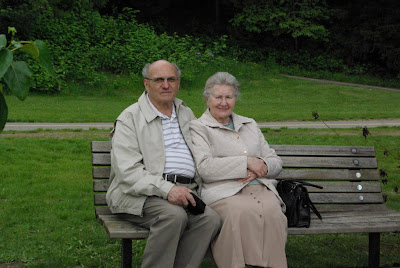 Our daughters Stephanie and Susanna who reside in the and our four grandchildren, Esther, Heidi, Silas, and Elliott also joined us last Thursday. Well, the house is certainly alive to say the least, and with only a few minor juice spills and other crashes, things are not too bad! 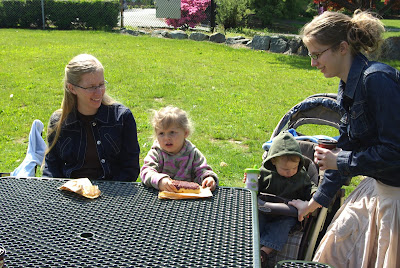 They all came to see us and also to visit their new niece and cousin Charlotte Anne who many of you have already met in person or read about at http://trooperscoop.blogspot.com/

Having a great time…till next time!